by Rashtra Times
in Entertainment, Festival, Music
Reading Time: 2 mins read
0 0
A A
0 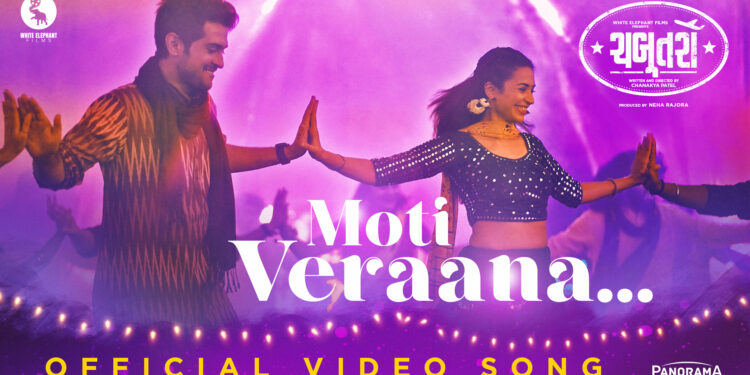 Navratri 2022 is here showering the joyous colors. “Chabutro” has included the song “Moti Veraana” recreating old memories with new chemistry. This is one of the most loved Navratri songs of all time of Amit Trivedi sung by Osman Mir. The filmmakers of Chabutro decided to deliver the gift of this loved song in the new film for the audience.

The chemistry between Raunaq Kamdar and Anjali Barot in the new version of “Moti Veraana”  has got the heart of their fans & followers. Their screen presence has come out as one of the most adorable affairs. These two are looking like fresh go-to coupled with the cute connection and playful vibe.

The release of the Navratri special song has got a lot of appreciation from the audience and the Garba vibe of the song has given major goals this Navratri. This preloved song is colorful and people are already dancing to the beats of it. It is believed to have rightly set the mood for this festive season with the blast of color and dance moves alongside great chemistry.

Talking about the making of the video, director Chanakya Patel exclusively shares with ETimes,”I wanted the song to be more real and relatable. We have always been served with glamorised version where hero and heroine gracefully dance on the tune of Garba. Although being a Gujarati, I never really connected with that concept. It is not necessary that every Gujarati person has to know Garba. There are many like me and hence Moti Veraana’ in the film ‘Chabutro’ is for all the Non-Dancers to relate. I hope people find motivation to learn Garba after watching the video!”

He also shared about the shooting experience, “The shooting was challenging because I did not want to follow the camera facing choreography and decided to keep the circular formation. Also, we had planned a 2 nights shoot schedule but it rained heavily on the first night before we could take our first shot. The entire set was drenched, lights were blown off and the soil had turned muddy. Everyone was super charged to dance on the beats of Moti Veraana but we had to call of the shift. The forecast of the next day showed rains but to our wonders the skies opened up post afternoon and we shot the full song in one night.