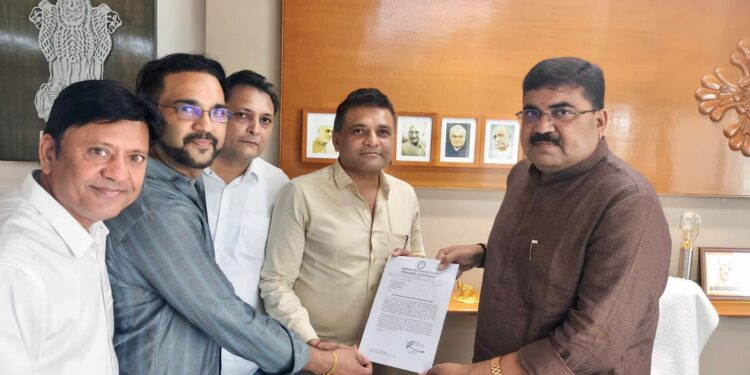 Ahmedabad: Gujarat Convener Ghanshyam Talavia and Joint Secretary Atulkumar Patel of the Indian Motion Pictures Producers Association (IMPPA) paid a visit to State Tourism Minister of Gujarat Arvindbhai Raiyani at his office together with IMPPA producer members. This trip was taken in response to the pressing need for the Gujarat Cinematic Tourism Policy announcement.

The member of IMPPA and film actor Ajay Devgan, who is also an active member of the association, will be present at the inauguration of the policy. IMPPA took prompt and effective action in consideration of the prior request and expressed gratitude in this respect.

On August 10, Mr. Abhay Sinha, president of the IMPPA, and other committee members have been invited to the launch of the launch policy for cinematic tourism. The association expressed its gratitude and stated that many of its producer members had been waiting for the publication of the Gujarat Cinematic Tourism Policy. Now that it has been released, the organisation is confident that Gujarat will rank among the most sought filming destinations.

This is only possible with a fully practical and pragmatic film policy that benefits all languages, the Association said during the meeting with the Tourism Minister. The Association thanked the Tourism Minister once more for the support he had provided to ensure that Gujarat remained a destination of choice for Gujarati filmmakers as well as all Hindi, English, and other regional language filmmakers. This is not only a linguistic filmmaker; it applies to all filmmakers.

The organisation IMPPA claims that there is an unending and expanding demand for entertainment. Since today not only every state in India but also many other nations around the world offer incredible subsidies and facilities including best offers, subsidies, free places, lodging, transportation facilities, and tax exemptions, the association is with Gujarat Tourism to ensure that Gujarat becomes a leading state. This is highly encouraged.

As a result, Gujarat has now made the decision to reveal its own policy, which the association enthusiastically supports and is determined to provide for as compensation for the state’s exceptional efforts.