by Rashtra Times
in Entertainment, Movie
Reading Time: 2 mins read
0 0
A A
0 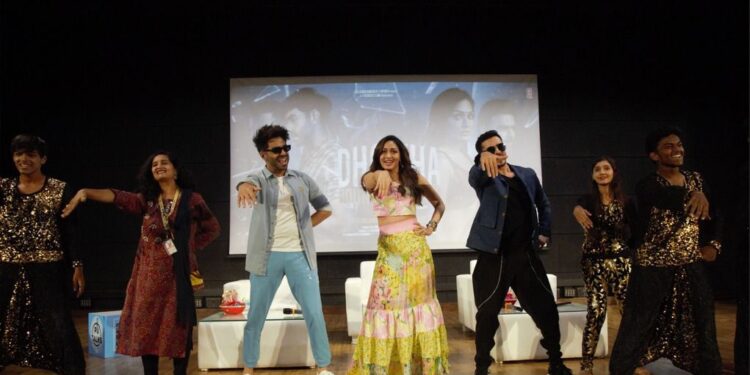 Kookie Gulati directorial ‘Dhokha – Round D Corner’ produced by Bhushan Kumar has already generated much intrigue with its trailer. The film starring Khushalii Kumar, R Madhavan, Darshan Kumaar and Aparshakti Khurana is a multi-perspective thriller that will leave you guessing right till the very end! Closer to the release date, the team of ‘Dhokha’ is on a promotional spree! The cast flew down to Vadodra to interact with the students of Parul University where they watched the trailer of the film and the recently launched song ‘Mere Dil Gaaye Ja’ with the lovely audience. What transpired during this daylong event was something out of the ordinary! On reaching the university, Khushalii Kumar, Darshan Kumaar and Aparshakti Khurana were surprised by a well-choreographed and outstanding dance performance by the students on the peppy and vibrant retro track, ‘Mere Dil Gaaye Ja’ which set the mood of the day the right way! 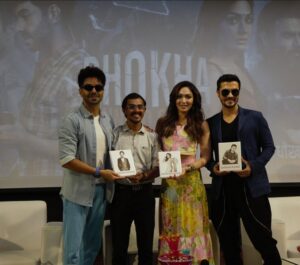 Subsequently, the artists were greeted with an auditorium full of students and fans alike, post which they proceeded onto the stage followed by a candid conversation with the emcee of the evening and interacted with the students. As a heart-warming gesture, some fans gifted Khushalii, Darshan and Aparshakti frames with their pictures in it! Reciprocating the same with a sweet gesture, the terrific trio invited the dancers on stage and grooved to the song along with them! The stars were overwhelmed with the love and support they received from the students of the University and needless to say, Dhokha – Round D Corner is definitely a highly anticipated film of 2022! 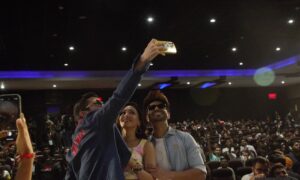 Produced by Bhushan Kumar’s T-Series, ‘Dhokha- Round D Corner’ starring Khushalii Kumar, R Madhvan, Darshan Kumaar and Aparshakti Khurana and directed by Kookie Gulati releases 23rd September, 2022. The suspense drama is based on a day in the life of an urban couple and takes you on an unexpected journey with twists and turns showcasing shades of grey in each character.