by Rashtra Times
in Ahmedabad, Gujarat
Reading Time: 2 mins read
0 0
A A
0 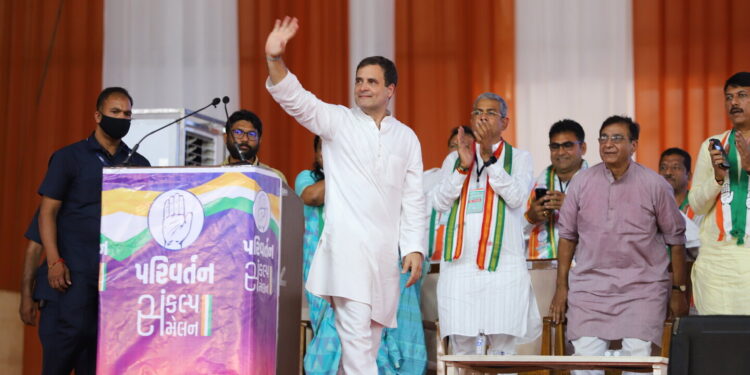 Mr Rahul Gandhi kicked off the Gujarat Assembly Elections 2022 campaign of the Congress with big poll promises. While Gandhi made several promises benefiting the common people, he also slammed the BharatiyaJanata Party (BJP) government in the state on multiple issues.

Addressing Congress booth-level workers at the ‘ParivartanSankalp Rally’ at the Sabarmati riverfront in Ahmedabad, Rahul Gandhi made the following election promises:

“Gujarat has become the centre of the drugs trade. All drugs are moved from Mundra port but your government doesn’t take any action. This is the Gujarat model,” Rahul Gandhi said, addressing the rally.

Mr Rahul Gandhi, who visited Gujarat two days ahead of the ‘Bharat JodoYatra’, arguably the biggest mass contact programme any the Congress leader has undertaken, also slammed the BJP-ruled Gujarat government for turning the state into a “centre of drugs trade”.

Rahul Gandhi’s visit comes as the ruling BharatiyaJanata Party and opposition along with the Congress is gearing up for the Gujarat polls due later this year.