‘The challenge was to make Ranveer Singh look like a common-man with uncommon integrity” : Darshan Yewalekar

The trailer of the upcoming Ranveer Singh film  ‘Jayeshbhai Jordaar’ has received a lot of attention and praise not just for the gender issues it addresses but also for the surprising ease with which the star has portrayed a common man after playing a series of larger-than-life characters.

His unprepossessing look in theis YRF production has been widely appreciated  and celebrity hair designer Darshan Yewalekar says, ” My first brief from director Divyang Thakkar in the YRF studio was a detailed description of what Jayeshbhai stood for, who he was as a person and how in this seemingly ordinary man, was hidden an extraordinary warrior. It was one of the longest  narrations I have ever heard about a pure character who belonged to rural India, is bound by social norms  but also has the guts to question and challenge them. This was a different kind of a ‘Mard’ with sensitivity and empathy for others. The challenge hence was to  make Ranveer Singh look like a common-man with uncommon integrity.” 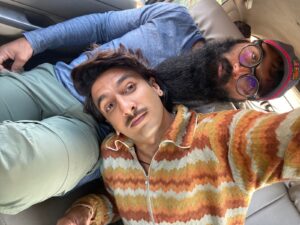 The director’s energy really inspired  Darshan and he says, “Divyang’s eyes would light up when he talked about the film.  I was  mesmerized and wanted to do justice to his vision by creating something cool for this character who despite being timid and homely, had a spark. I came up with a look that included  a moustache with a little bit of Chaplin in it. A very small, faded moustache, just falling short of the mouth to indicate meekness.  With the hair, we had to maintain the long length as this film was to be shot  between two other films.  I couldn’t play around much with Ranveer’s hair but created a look that was borderline caricaturish and gave the vibe of a timid guy who would go with the flow.  Divyang already had a lookbook and I was thrilled when my interpretation matched his vision exactly.  That’s the best unspoken compliment that you can ever get in your life.”

The audience is teaching us to create beyond limitations imposed by format and language,” says Veteran Producer Anand Pandit