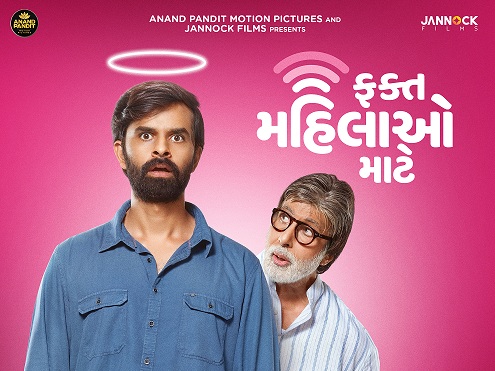 Veteran producer Anand Pandit’s much-awaited Gujarati film ‘Fakt Mahilao Mate’ starring Amitabh Bachchan in a never-before cameo along with Yash Soni and Deeksha Joshi is all set to release on August 19.  Directed by Jay Bodas and jointly produced by Anand Pandit and Vaishal Shah, ‘Fakt Mahilao Mate’ is touted as a family-centric comedy and will hit the theatres on the occasion of Janmashtami.

Says Anand Pandit, “Fakt Mahilao Mate’  is a social comedy and addresses issues that every member of the audience and especially all women will identify with. We are bringing forth an important social message without being preachy in a manner that will make people laugh and also think. This film is also very special to me because after ‘Chehre,’ I am once again working with Amit ji. It was just amazing to see him adapting to the milieu depicted in the story and mastering the linguistic nuances needed by his character. His ease with Gujarati diction blew me away and his professionalism on sets and in the dubbing studios is of course legendary!”

Vaishal Shah adds, “I have been a part of Anand Pandit’s cinematic family for a while and it was an absolute pleasure to once again collaborate on yet another special project after ‘Chehre’ with the one and only Amitabh Bachchan. This film has acquired an entirely new dimension because Amit Ji has lent his magical voice and presence to it. We cannot wait  to bring ‘Fakt Mahilao Mate’ to the audience on August 19.”

“Gujarati aspirants have been flocking to the U.S. in large numbers”, says Dilli Bhatta, lead attorney at Applyusavisa.com