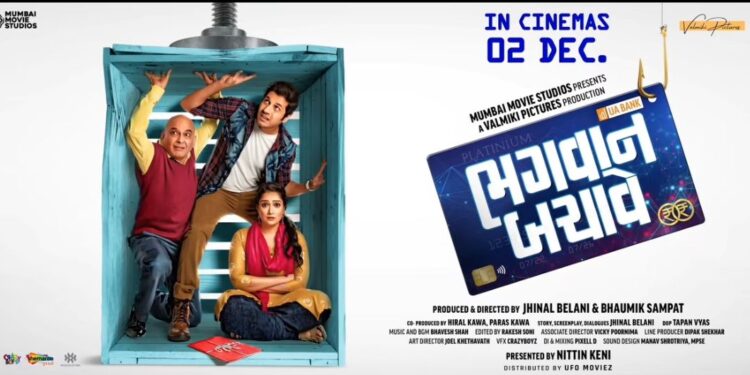 The teaser of the Gujarati film ‘Bhagwan Bachave’ looks quite promising. Judging by the teaser, the movie seems to be an absolute entertainer. The teaser of the film begins in a lawyer’s office, where the three protagonists of the film are pleasantly surprised to receive the news of a multi-crore inheritance. The teaser features Bhaumik Sampat, Jhinal Belani, and Muni Jha in lead roles.

Produced by Valmiki Pictures, distributed by UFO Moviez, and presented by Mumbai Movies Studios, the new Gujarati comedy movie ‘Bhagwan Bachave’ is all set to entertain the audiences. The film is produced and directed by Jhinal Belani and Bhaumik Sampat,  and co-produced by Hiral Kawa and Paras Kawa. The film is written by Jhinal Belani with cinematography by Tapan Vyas, edited by Rakesh Soni, and music by Bhavesh Shah. Nittin Keni, the producer of Gadar, Lunchbox, Rustom, Sairaat, and other hit films is the presenter.

A laugh riot, the film seems to have a blend of drama, suspense, and a roller coaster of emotions. Along with entertaining the audience, it packs an important social message. The film depicts the plight of people stuck in the vicious circle of loans, credit cards, and installments. The film is all set to hit the big screens on December 2, 2022.